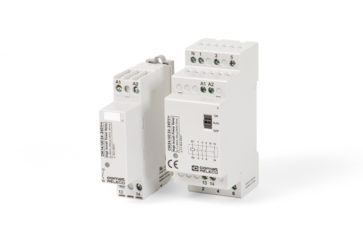 Modern light sources such as LEDs or fluorescent lamps with electronic ballasts have an inrush current that is 250 times higher than their nominal current — a challenge for switching components. The CHI series power relays were developed specifically for applications in the field of lighting technology, and are correspondingly equipped for the switching of high inrush currents.

At the moment they are switched on, switching power supplies for LED lights, electronic ballasts, as well as power supplies in industrial environments experience a current that can be up to 250 times as high as the device’s nominal current. For example, when switching on a supposedly ‘harmless’ 90 W LED floodlight, a brief current of almost 100 A may be experienced.

By already taking these aspects into account when choosing the size of the components, the operator of a facility can avoid high follow-up costs due to constant replacement procedures.

The CHI power relay series is setting new standards in this field. With the latest contact technologies, they allow inrush currents of up to 800 A to be switched for a nominal current of 16 A. The microprocessor-controlled zero voltage switching further reduces the inrush current, allowing significantly more lighting units to be controlled per channel than previously available switching components. With the CHI34, this technology has been implemented in a three-phase device for the very first time, in which the phases are individually monitored and switched at a 120° offset from each other. With a width of 35 mm, the CHI34 also possesses a make contact for auxiliary circuits and a manual operating switch (0-Auto-1). This makes the device half as wide as a conventional installation contactor with additional auxiliary contact module. Thanks to its low-noise switching procedures, the devices from the CHI series are also ideal for use in residential settings.

The graph below shows the inrush currents of a single, typical fluorescent lamp. The same behaviour is also observed in LED lamps. Naturally, the inrush current increases by the appropriate factor when multiple lights are used. For determining the number of lights and/or ballasts which can be switched using the CHI34, the performance characteristics of the ballast need to be taken into account. Our support representative will be glad to assist. 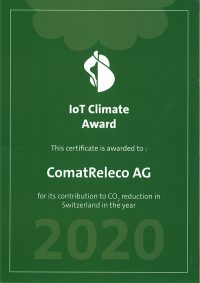 We are proud to have received an award for CO2 reduction for our remote monitoring and control device CMS-10R messaging system from Swisscom.
More… 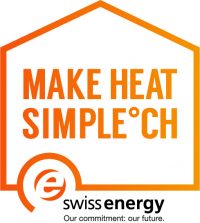 MakeHeatSimple is an initiative by SwissEnergy and its numerous partners to reduce the energy costs of second homes. By installing remote control systems for heating systems, more than 2000 GWh/year could be saved in about 700,000 second homes in Switzerland alone.
More…

MEASURING AND MONITORING with the ComatReleco family of measuring devices

Current and voltage monitoring relays are being used not only to protect systems and persons, but also in process management. ComatReleco measuring devices are the perfect support for users’ needs in the field, right up to supervisory and management level.
More…

In this time of energy transformation, it is increasingly important to have knowledge of a complete system's energy use or an individual output. The optimisation of energy flows from infrastructural and industrial systems no longer exclusively concerns typical energy-intensive companies, but also KMUs in industrial and service provision sectors. Also, previous knowledge of service requirements of performance components and the optimal utilisation of distribution branch points are important subjects in a modern automation environment. These tasks require a measuring infrastructure that performs well and which can be scaled according to various needs and topologies.
More…